My guest this week is Geoffrey Wallis, author of A Voice From Inside: Notes on Religious Trauma in a Captive Organization. Geoffrey is Physically In but Mentally Out (PIMO) of the Jehovah’s Witnesses. After recognizing the religious trauma and the cognitive dissonance he was experiencing he found help through therapy. He remains within the Watchtower organization because it is a “captive organization” which enforces shunning by family members and friends.

Geoffrey’s book, A Voice From Inside: Notes on Religious Trauma in a Captive Organization, is an evenhanded look at life inside a High Demand Religious Group. Geoffrey shows Secular Grace in his documenting his personal experience. It is incredibly well written and interesting to read.

A Voice From Inside: Notes on Religious Trauma in a Captive Organization
https://amzn.to/3BRvmjv

Nominate and Vote for the Graceful Atheist Podcast on the Podcast Awards
https://www.podcastawards.com/app/nominations

Support the podcast
Via Anchor.fm and Stripe
Via Paypal: paypal.me/gracefulatheist

My guest this week is Joel Furches. Joel is a Christian and a psychologist researching topics of religion. He has a BA in psychology an MA in education, and he is working on his PhD in Behavioral Analysis. He he has focused on conversions and deconversions and has written a well researched article entitled: Why Do Christians Become Atheists? A Case Study.

The people I find most likely to adopt the label atheist and deconvert are the people who tied their identity most importantly to the Church.

Joel and I discuss his research and walk through his model of deconversion. We discuss the “Market place of ideas” and “The Christian Bubble.” We define the terms disaffiliation, deconstruction and deconversion.

I would advise intellectual humility and the ability to say “I don’t know” about things.

Joel’s advice for Christians who are seeing more deconversions:

[What] I would say to Christians in general is that it is not their responsibility to re-covert [the deconvert].
They have not failed because this person deconverted and they will probably not succeed in re-converting them.
It is to respect the person who has deconverted, respect their experience. Give them the right that any other human being would have which is to defend their views. And interact or engage in those views as important.

Why Do Christians Become Atheists? A Case Study
https://hubpages.com/politics/Why-do-Christians-Become-Atheists-A-Case-Study

Perez, S. and Vallières, F., 2019. How Do Religious People Become Atheists? Applying a Grounded Theory Approach to Propose a Model of Deconversion.Secularism and Nonreligion
http://doi.org/10.5334/snr.108

Send in a voice message

Support the podcast
Via Anchor.fm and Stripe
Via Paypal: paypal.me/gracefulatheist

A recurring theme of this blog is my reflecting back on what it felt like to be a Christian and then go through the deconversion process. The Deconversion How To post was the deepest dive into this topic. The question I continue to ask myself on this side of deconversion is, “why did it take so long?” I imagine secularists who grew up without a god secretly ask the same question and look slightly askance at those of us who once believed.

Why did it take so long?

This is a non-trivial question. I was a skeptical Christian to begin with. I often questioned why Christians believed and behaved as they did as it immediately appeared incongruent with the bible as I understood it.

Why was I so gullible in the first place? Before becoming a Christian I was skeptical of supernatural claims. I easily dismissed other forms of woo: alien abductions, Bigfoot and ESP were obviously false. What was it about Christianity that sucked me in and kept me for 20+ years?

My answer to these questions is a theme that shows up throughout my writing. This post will give it a name: The Bubble.

The bubble is a way of expressing the self reinforcing nature of faith. Everything points towards the center: god. Most of the people a believer comes into contact with are believers. Most of the content believers choose to consume is from other believers. Everything the believer experiences is interpreted in light of the bubble of faith. All of the experiences, people and content that do not reinforce the bubble are cast as sinful, outsiders and “worldly.”

In short, the believer encases themselves into a hermetically sealed bubble. Nothing bad is ever allowed in and everything on the inside reinforces what they already believe.

In case you have never had the experience of faith, there are many secular examples of bubbles. The Washington bubble was certain that a self aggrandizing incompetent racist could never be nominated for a major political party, let alone, win the general election. 2015 through 2018 we have been coming to terms with the fact that middle American voters were not in said bubble. Middle America itself could be considered a bubble. We Americans live in a bubble where we sometimes forget the rest of the world exists. We have but two boarders and oceans that isolate us. The concerns of Europe, Africa and Asia are distant and theoretical. Much digital ink has been deployed in lamenting our “siloed” (read bubble) social media echo chambers. We experience bubbles every day.

I went to a small Christian bible college with around a thousand students and around seven hundred or so living on campus. You basically knew everyone. We were self aware enough to comment to each other on the “bible college bubble.” We were aware that the big wide world out there did not care about our small dramas.

Even Christians are aware to some extent of the bubble they live in. They refer to the language of the church as “Christianese,” in recognition of its incomprehensibility to outsiders. They start “missional” churches focused on being relatable to non-Christians. This generally means a light show and a band, because they have no idea what non-Christians find relatable.

And let’s be clear, there is an atheist bubble as well. Reader beware.

Now that we have an idea of what a bubble is, let’s discuss how the bubble tends to keep one from leaving.

I recently read Daniel Kahneman’s behavioral economics book, Thinking Fast and Slow. In it, he brilliantly describes thought experiment after thought experiment that proves to yourself how we act irrationally as human beings. One of his theses is that coherence has no bearing on validity. As humans we are tricked into assuming that if a story makes sense, if it conforms to our expectations that it, therefore, must be true.

The coherence of a story has no bearing on its validity.

My twitter friend, Kathleen B. Shannon, who often counsels those who have experienced religious trauma, puts it this way.

Truth is in many way contextual. Hence Christians in the bubble believe it to be true. Internal validity, as it were. But the truth wears off after a while.

Truth is in many ways contextual. Hence Christians in the bubble believe it to be true. Internal validity, as it were. But the truth wears off after a while.

If one accepts the premise that the theistic god exists, then anything is possible. And this makes incredible things credible. How did the universe begin? God. Who is responsible for the bible? God breathed it. Did Jesus rise from the dead? God can do that without breaking a sweat. Did god send his son, who is himself, as a sacrifice to himself, to appease his anger at sin he entrapped his first created good people into, and continued to ascribe blame to their decedents through all of history? It seems valid if, and only if, you are inside the Christian bubble because the story is compelling.

This is something I struggle to convey to my secular friends who have never been believers. “How could anyone ever believe these things?” Kahneman’s thesis explains this. It turns out it is natural human behavior. We cannot help but be convinced by a compelling story, particularly one that fits our preexisting beliefs.

And Christianity is compelling. The ideal of laying one’s life down for one’s friends is baked into Western culture. We can argue whether Christianity introduced this idea or inherited it. But if you doubt this is true, watch any movie about war, watch any movie about a dog, watch Will Smith’s Seven Pounds (spoiler alert) and try not to cry. This ideal speaks to the very core of our culture and the story of the crucifixion is the pinnacle of that ideal.

This partly explains the way theists and atheists talk past each other. They are not in the same bubbles, they do not hold the same things as valid and they are speaking different languages. Beating believers over the head with objective facts is ineffective because they are inside their bubble and the story they tell themselves is coherent and internally valid.

It is not easy for a person to realize they are in a bubble, let alone, to view the world from outside it.

It wasn’t until I explicitly set as a goal for myself to find objective reasons to believe, that my perspective grew to include the perspective outside the bubble. That was the beginning of the end. It was obvious to me that other religions were false. As soon as my perspective grew to view Christianity from outside the bubble, it became equally clear it was obviously false as well. The reason? There are no objective reasons to believe. 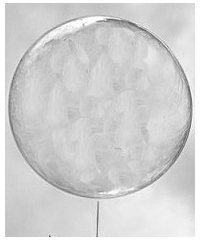 The picture above of a bubble resting on the tip of a pin is the thousand words depicting the precarious nature of faith. The single premise, “god is,” predicates the vast complexity of religious faith. It makes sense if that one premise is true. Above I said, “if one accepts the premise that the theistic god exists, then anything is possible.” The reverse is also true, if one entertains the idea, even for the briefest of moments, that the theistic god does not exist, the folly of theism is revealed.

If your bubble bursts, as painful as that might be, congratulations! You have gained a new perspective.