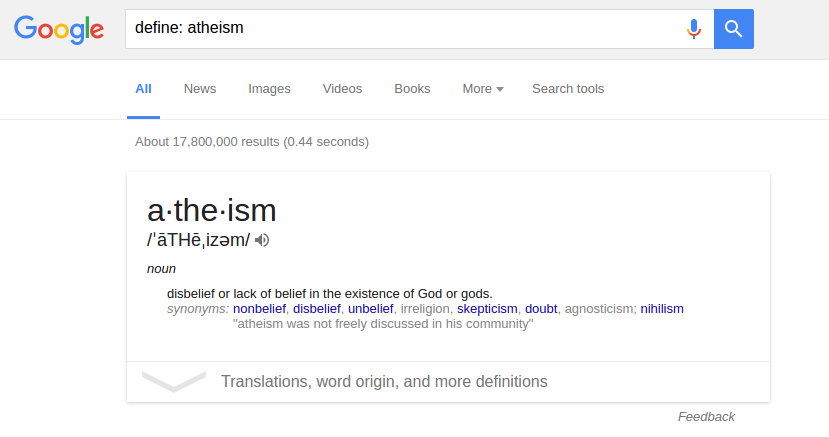 Recently I have noticed in the twitterverse a number of theists arguing some variation of the following:

Atheism takes as much faith as theism

This is an interesting argument for me because even when I was a believer it would have never occurred to me to think this way. I spend a great deal of time trying to understand the process I went through from faith to lack of faith. I try to remember how I felt and how I thought when I was a believer. But I never would have made this argument.

I am not trying to be obtuse or pedantic. If I am being extremely generous in an attempt to facilitate communication, I can almost understand the thinking of the theist. To the theist all things have their being in god and therefore, the concept of a universe that does not require god does not compute. To the believer god is self evident and therefor the atheist must be deliberately willfully rejecting god. They might call that a type of “faith.”

There are a number of problems with this perspective. Not the least of which is “Which god is self evident?” My believer friend, let me do you a favor.  Stop using this argument. It is a bad one for anyone who owns a dictionary. Atheism is a statement about what one does not believe. We do not say it takes faith to not believe in other things. The number of things one does not believe in is infinite.

There is no evidence for any of the above statements.

The problem arises when the believer assumes the atheist needs to disprove god. This begs the question. The burden of proof is on the believer to provide evidence that god exists. Most atheists are skeptics, meaning they require evidence before they will accept a claim. Atheists like myself have examined the arguments and the evidence and found it wanting. A rejection of the claim that a theistic god exists is based on lack of evidence or poor arguments for the claim and not on “faith.”

In a future blog post I will address some of the things that some atheists may be said to “believe.” Some of us are humanists, some of us are naturalists, some of us are materialists. But it is important to distinguish these positive philosophies from atheism. Each of them stands or falls on its own merits. If one or more were to be disproved, that would not constitute evidence for a theistic god.